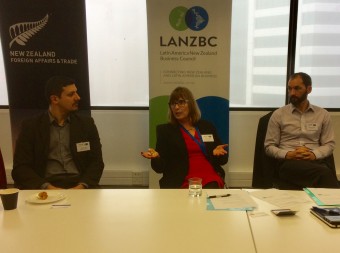 A thick fog didn’t stop LANZBC members and friends from enjoying the first of the LANZBC’s Ambassador Breakfast series with Caroline Bilkey on Thursday 2 August. While denied the usual enviable view from NZTE’s Auckland office, attendees were treated to a wonderfully rich, frank and personal presentation on Brazil from Caroline, now Assistant Secretary and Group Director of MFAT Auckland.

Caroline, who recently completed her term as New Zealand’s Ambassador to Brazil and Suriname, carried out her ambassadorship in Sao Paulo during turbulent times – from the nation’s joy at hosting the FIFA World Cup and the 2016 Olympics, to the despair of having its President impeached and the scandal surrounding Operation CarWash. However, the Brazilian people have seen that those previously considered ‘untouchable’ can and have been held to account for their actions, which in turn is evoking a massive change in the culture of politics.

Caroline reported that with a ranking of 125 in the Ease of Doing Business Index, in terms of investment, Brazil is not for beginners. However, as the world’s 8th largest economy - although challenging - the market offered lots of opportunities for kiwi exporters.

Agritech, Education and Tourism were the key sectors for New Zealand business in Brazil. Tourism NZ had reported a 30% increase in tourists from Brazil in 2017, while International Education – New Zealand’s 8th biggest market – saw 3000 students from Brazil study in New Zealand in 2017. With the southern states of Brazil offering similar conditions to New Zealand farming, New Zealand is seen as a reference point for Brazilian dairy farming, with farmers keen to develop more efficient and productive methods of farming.

Brendan Mahar from NZTE commented that Brazil was a high risk, high reward investment - being such a tough market to enter also resulted in less competitors, therefore offering greater opportunity for success. Brendan noted that tariffs could be challenging, and therefore many New Zealand companies worked around that by manufacturing their product locally. Taxes were also an issue which needed serious consideration.

Caroline commented that Brazil was shifting from being highly protectionist to having a more open economic approach - marketing itself to be a part of the global business world. Brazil had many free trade agreement negotiations in the pipeline, although practical outcomes were yet to be seen.

Caroline noted that while the October 2018 elections were unpredictable, she felt the current economic downturn was due to a combination of a decline in the commodities boom, and the Government not bringing in the necessary reforms (tax reforms, labour reforms) when the ‘going was good’ rather than political uncertainty.

Regarding Brazil’s relationship with China, Caroline reported that China was Brazil’s no. 1 trading partner, with China having invested US$20million in Brazil’s ports and fuel development. If Air New Zealand launched a direct route to Sao Paulo - as is hoped - not only would this open up Brazil for New Zealand exporters, but would make New Zealand a great route for Asia and Australia exports to Brazil.

The LANZBC would like to thank Caroline Bilkey for allocating time for us and NZTE/MFAT for hosting the event.