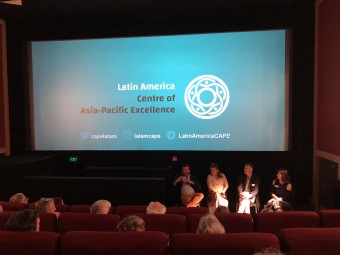 The LANZBC were privileged to attend the Auckland screening of The Inside Guide: Exploring Kiwi Success in Brazil, earlier this month. The five-part documentary was funded by the Latin America CAPE and made by the award-winning Brazilian producer and director David Schurmann, who learnt his film-making craft here in NZ.

Introduced by Fonterra's Alex Turnbull, who attended with his wife Ms Ana Cristina Gaudio De Almeida Santos Turnbull, the newly appointed Honorary Consul for Brazil, and Matthew O'Meagher, Director of the Latin America CAPE, the documentary tracks the journeys of six New Zealanders who have created business and academic success there.

Following the screening, attendees enjoyed a panel discussion with David Schurmann and two of the film's stars, Marco Kerkmeester and Felicity Taylor, who shared insights into their business vision and their thoughts on opportunities for Brazil/NZ trade developments.

Thanks to our friends at the Latin America CAPE, The Inside Guide: Exploring Kiwi Success in Brazil is available to watch online HERE.