LANZBC Directors meet with NZ Ambassadors to Brazil and Argentina, Uruguay and Paraguay 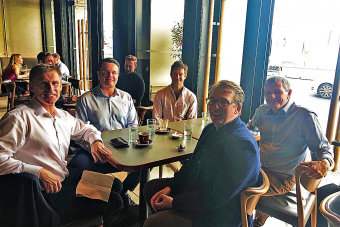 LANZBC board members welcomed the opportunity to meet in December with New Zealand’s Ambassadors to Brazil, Chris Langley and Argentina, Uruguay and Paraguay Carl Worker.

LANZBC President Simon O’Connor and board members Shane Ball and Peter McMenamin met over breakfast with New Zealand’s Ambassador to Brazil Chris Langley during the latter’s visit to Auckland on December 16. Ambassador Langley updated the Council on the latest political developments in Brazil, their impact on trade, and the advancement of the discussions around New Zealand’s involvement with Mercosur, which he said would be a major focus of his in 2020. The LANZBC board members informed Ambassador Langley about the Council’s plans for the year, including a flagship event with several of New Zealand’s Heads of Mission in Latin America scheduled for May. They were joined in their meeting by Marcelo Credidio, International Manager (Business) at the University of Auckland.

A couple of days earlier, on December 13, board members James Dixon and Juan-Luis Toledo and Executive Officer Cristián Cornejo met with then Ambassador-Designate to Argentina, Uruguay and Paraguay Carl Worker at the MFAT offices in Wellington ahead of his posting to Buenos Aires. The group discussed the current state of the trade relationship, the Working Holiday programme, agricultural exchanges and opportunities for collaboration between the LANZBC and the New Zealand Embassy.