President of the Republic of Chile, Sebastián Piñera State Visit to New Zealand 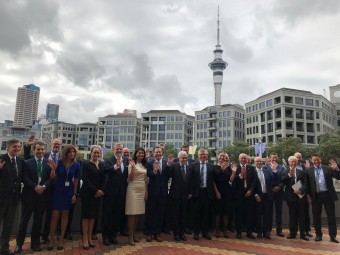 At the invitation of the Right Honourable Jacinda Ardern, Prime Minister of New Zealand, His Excellency the President of the Republic of Chile, Sebastián Piñera, undertook a State Visit to New Zealand on 19 November 2018.

President Piñera was welcomed at Government House in Auckland by the Governor-General, the Right Honourable Dame Patsy Reddy, engaged with business representatives with commercial interests in Chile, and had a warm and wide-ranging discussion with Prime Minister Ardern. President Piñera and Prime Minister Ardern discussed a range of issues across the bilateral, regional and multilateral agendas, highlighting the high level of alignment and common interests between the two countries.

At the meeting of agri-tec and food processing executives, the LANZBC was well represented by Director Nick Williams, of Pacific Basin Exports, and several of our member organisations including Fonterra, Manuka Farms, Agriseeds and Minter Ellison. The meeting demonstrated New Zealand’s significant investment in Chile and highlighted the opportunities where investment could grow as a result of the CPTPP.

Shared values and people-to-people links across the Pacific Ocean underpin the strong bilateral relationship between Chile and New Zealand. The two Leaders acknowledged the strength of the ties and agreed there was great potential for further growth in the relationship.

In a demonstration of the two countries’ ongoing commitment to work together, the Leaders welcomed the signing of the following instruments:

The President of the Republic of Chile expressed gratitude for the warm welcome extended by the Governor General, the Prime Minister and Government, and the people of New Zealand.

For the joint statement by His Excellency Sebastián Piñera, and the Right Honourable Jacinda Ardern, click here.