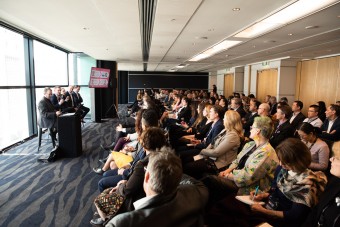 Whereas NZ universities have been recruiting students in traditional markets such as South East Asia and China for upwards of 20 years, Latin America has only recently come into focus for the sector. Marcelo Credidio, International Manager at the University of Auckland’s Business School, pointed out that the universities quickly realized the need to work together in opening the market.

“In Latin America, with all the challenges of relatively undeveloped source markets for NZ universities, we soon realized it wasn’t about ‘my uni’ or ‘your uni’. It’s really about the NZ universities working together and collectively creating the awareness and reputation required to succeed.”

A key part of the move to a collaborative approach was the establishment of the Universities New Zealand Latin American Working Group, chaired by UNZ Senior Manager Sheree Moanaroa. The group, containing representatives of 7 of the 8 NZ universities, represents a collegial joint approach, combining the expertise of marketing and business development professionals with considerable experience in the region.

“The Working Group reflects that our approach has been a bottom-up strategic initiative, providing a unified voice and collective agreement on objectives, and facilitating communication of key messages with Government and other agencies.”

Julian Ashby, former Education New Zealand Regional Director- Americas and Europe, pointed out that New Zealand is a small player and needs to consolidate and collaborate as much as possible to make the greatest possible impact. A focus on finding common challenges and potential to collaborate with Latam partners has led to several successful Education New Zealand-sponsored academic delegations. Julian summed up the ENZ approach with a quote from a Canadian colleague; “We want to be a partner, not a poacher.”

A key development since 2016 has been the tremendous success of outbound initiatives taking Kiwi students to the market on study and internship experiences. More than 250 NZ students have been to Latin America on the popular Prime Minister’s Scholarships, and mobility experiences funded by the Latin America Centre of Asia Pacific Excellence (CAPE). Craig Nicholson, Programme Manager at the CAPE, reminded us that the key to development is multi-sectoral.

“Mutually enhancing capability is essential to stepping things up in Latin America. Sharing our learnings, failures and successes across the university, student and business ecosystems, and building connectivity is the key to building greater awareness of what NZ has to offer.”

Whereas success in traditional markets has tended to be defined by the number of students recruited to study in NZ, Shane Ball highlighted that the universities are now adopting a wider definition of success.

“We have students queuing up to go to Latin America on mobility experiences, and a growing number of staff on delegations building relationships and networks with their peers in Latam, until very recently considered a no-go region due to security concerns. We have built an active and engaged peer network, engaged with institutions that were previously unknown to us and built a joined-up approach including students, institutions, government and business. Collaboration has been the key to leveraging our resources in the face of well-established competitors such as Australia, the US and Canada.”